In the darkest part of sorrow, if you hear Horatio Spafford’s well-known hymn It is Well, it can sound far-fetched. How could anyone experiencing profound pain honestly say that, though they are drowning in sorrows, it is “well” with their soul? When you look deeper into the origin of this hymn, however, you discover that Horatio Spafford’s lyrics came from a place of authenticity that few can truly fathom.

Before the 1870’s Horatio Spafford and his wife Anna led lives of abundance. Heartbreak first crept into their home when their four year old son died of Scarlet Fever. Then, in 1871, tragedy struck again, as their city was decimated by the Great Chicago Fire. Overnight, the Spafford’s saw all of their material holdings go up in flames. They clung to one another and to God as they devoted themselves to the rehabilitation of the city. After two grueling years, with Anna experiencing poor health and business finally recovering, Horatio and his family planned a trip to Europe for some much-needed respite.

On the eve of their trip, Horatio was detained, but Anna and their girls kept their booking on the steamship Ville du Havre, planning to meet Horatio when he arrived on the next ship. Then the unthinkable occured. On November 22nd, 1873, the Ville du Havre was broadsided by another ship, sinking in just minutes. Anna Spafford was found clinging to a piece of the wreckage near Wales and rescued, but the four little Spafford girls were among the 226 lives lost with the ship. 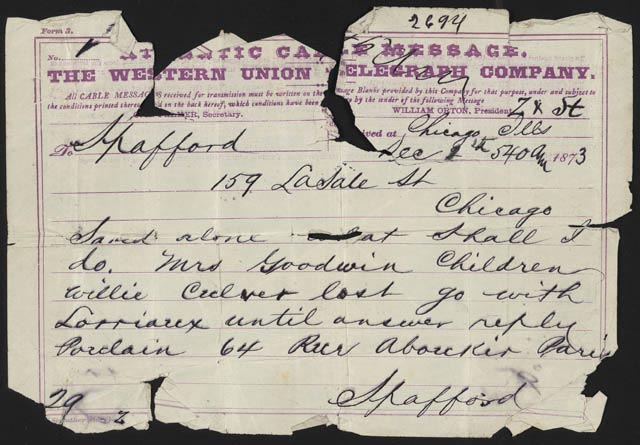 Anna Spafford’s telegraph after her rescue, “Saved alone what shall I do”[source]

Overwhelmed with grief, Horatio left to rejoin Anna. When his ship reached the nearest calculable site of the Ville du Havre wreck, the captain informed Horatio that this was the final resting place of his daughters. In a moment of quiet, as he stared into the waters that consumed his children, Horatio took out some paper, and wrote down the verses that would become the great hymn It is Well.

Contemplating the deep, Spafford clung to the only assurance that does not waver; “that Christ has regarded my helpless estate, and hath shed His own blood for my soul.”

Horatio’s hymn points us to the truth that David proclaimed in the 42nd Psalm:“My soul is cast down within me; therefore I remember you . . . Hope in God; for I shall again praise him, my salvation and my God.”

Both Spafford and King David praise God as the only remedy sufficient to treat their souls, a remedy who remains the same yesterday, today, and forever (Hebrews 13:8). His sufficiency extends to cover every trial and sorrow. Through God’s sovereignty and the victory of Jesus, sin and death alike were defeated (Romans 5:1-5) so that we can face the worst and say with confidence that even death has no sting (1 Corinthians 15:54-57) and, in the darkest part of sorrow, “It is well, it is well with my soul!”