Anyone who had the good fortune to grow up watching Disney movies (we’re talking before CG was even dreamt of) will remember that classic moment when Bambi, Thumper and Flower learn about being twitterpated from Friend Owl.

I can’t help but think of this scene every time I think about the Twitter Trend.

Important preface to everything I say hereafter: I have had a twitter account for quite some time and, the many and various resounding voices heralding its usefulness have a point. Twitter is all about networking and has great potential as a networking introductory tool. (Also please note that all images were found via google image searches and pinterest.com and none of them are my intellectual property…)

That said, I harbor intense dislike for Twitter on most levels, from lexical associations to practical applications. 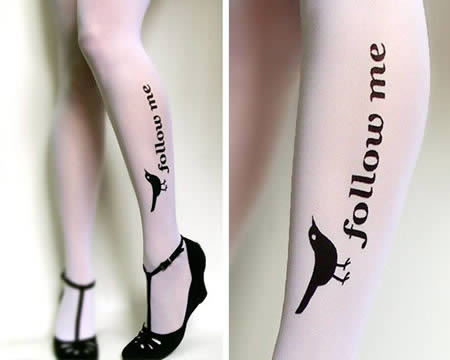 Let’s start with the shallow, shall we? With Friend Owl’s foreboding diatribe resounding in my nostalgic memories, the mere word “twitter” calls to mind the terrifying description of Twitterpation (seriously, if you haven’t watched the movie yet, it’s powerful . . . in a dark-side-of-the-force kind of way). Like Bambi and his friendly forest friends, after hearing about the Twitter trend, I’m wary and resistant.

Second negative lexical association? The root of the word Twitter is the word “Twit”. As in, “You are a stupid twit.” How ironic that a web-tool promoting pithy sentence-sharing should name-share with an actual insult to human intelligence.

Can we talk about the idea of “tweeting” and the little birdy logo for a second?  I’m sure it all started as a lovely tacit metaphor, likening the short little updates to the tweeting of pretty little songs by attractive little birdies from afar. Unfortunately, based on the “flighty” characteristic of birds, the historical/linguistic connotations are not so positive . . . leaving the outside-twitter observer to wonder if it’s any shocker that people with Tweeting constantly on their minds seem so bird-brained.

(Can you believe she diss-ed GOOGLE?! The nerve.)

In fact, few bird-terms or idioms are flattering. Jailbird, bird-brain . . . Gosh, when you’re winged it usually means you’ve been shot and are going down. If something is for the birds, that means it’s utterly useless, and, let’s face it, to put a feather in your cap really only means that you’ve KILLED a bird and should be congratulated. Killing two birds with one stone is always better than one in the world of symbolism. So, tell me, why would I really want to be associated with a bird-related social networking site?

I know, I know. You’re probably shaking your head, having forgotten all about my little preface to this rant. I should probably have begun with my actual concrete reasons for disliking twitter, rather than the surface-level negative associations.

Anyone who knows me knows that I love and defend social networking the same way I love and defend the second amendment. . . I see its utility and the significance in its existence even if I choose not to always engage in the various opportunities therein. However, I refuse to appreciate twitter as anything other than a necessary evil for four major reasons.

First, Twitter promotes brevity of thought. In a world where information is at our fingertips and technology is bursting beyond the seams of imagined capacity, I do not see the true value in shoving every thought into 140 characters. Eliminating unnecessary information is one thing, but boiling information down to that extent officially counts as dumbing it down in my book. 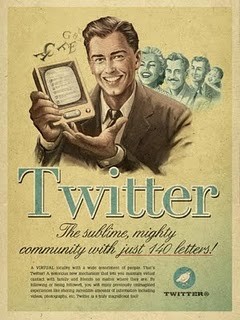 Second, Twitter detracts from the social “real world”. Too many people are spending significant amounts of time on their laptops, ipads or smartphones tweeting their shallow 140 character messages into the internet ether while ignoring the flesh-and-blood people they encounter on a daily basis.

Rather than actively engaging in their surroundings, individuals become preoccupied with passively socializing; People engage in twitter to the detriment of their own social, or even physical, well-being.

Having spent three fascinating high-school summers as a cashier, it is clear that human beings love to feel important (i.e. the recognition of “followers” online), but undervalue the small interactions of day-to-day life. The world would be a better place if people invested more time in social skills and less in how to fit everything they want to say into 140 characters.

Third, Twitter facilitates quantity over quality. Former Internet marketing specialist and current Internet strategy consultant Aidan Henry blogged about twitter abuse in June of 2009, saying (among other things) that “the uneducated have been let loose with tweet fever . . . 5 tweets a day (at most) should suffice.” The twitter populace has clearly caught some sort of bird-flu which causes them to tweet like it’s going out of style.

A comment on this same blogpost reads “hahah, whhhhat? Where have you been? ‘…without a purpose or goal in mind.’, ‘…sea of thoughtless, frenzied tweets.’, ‘Twitter has become a true time sink.’, ‘…the uneducated have been let loose with tweet fever.’ , ‘It’s like giving a gun to a child – instant chaos.’, ‘…Twitter kills productivity.’ That IS what Twitter is for, all about, its CORE. The heart of the beast IS thoughtless narcissism time sink waste of life.” It appears that people are more interested in putting anything “out there” than worrying about what they put out there.

This is not even going to go into the discussion of people who tweet things and then subsequently must deal with the fallout of the stupidity of tweeting something important that was not meant to be shared. 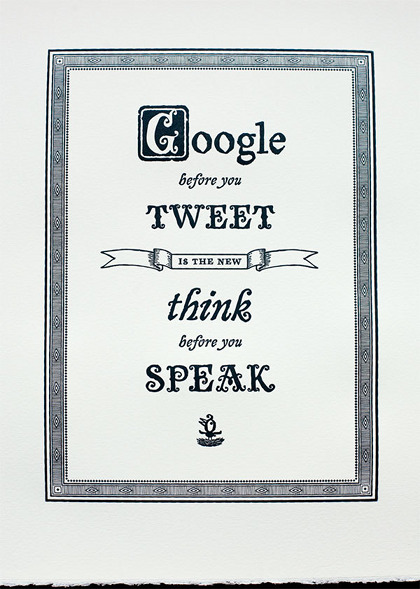 Fourth, and last, Twitter has been monumentally outclassed by other social networking sites. While twitter is a simple interface that allows even the least intelligent of human beings to find some form of expression, I have yet to see it measure up to any other networking site for design. The various applications for Google alone have more than enough to keep the online social world happy and well-networked. And Facebook, for all the hard knocks it takes in the media, provides the twitter-like ability to share a thought at random in conjunction with a myriad of other online tools (e-mail, “note”/blogs, chat, etc.). Twitter is simply unnecessary in a world where there is so much more out there.

So, if you made it this far and you are a huge fan of twitter, kudos. For all my rant, please remember, I do have a twitter account and have . . . very occasionally. . .  found it handy for an introduction, a handy-dandy link or a corporate announcement, but it is only useful in the same way that a billboard, a coupon or a hotel wake-up call is useful; in its connection to something better.