Mock me. Judge me. It won’t change a thing.

About three things I am absolutely positive. First, perhaps the Twilight Saga Series should not be taken too seriously as they are about teenagers and Vampires. Second, there is a part of me, and I don’t know how dominate that part might be, that is capable of seeing the ridiculousness inherent in obsession with a Young Adult Vampire Series. And third (perhaps most importantly), I am unconditionally and irrevocably in love with Stephenie Meyer’s Twilight Series.

Some might submit, “If you’re smart, you’ll stay away from this series.”

So, since I have an abiding love for this series, it logically follows that my affinity for theme parties might take a little turn for the immortal, no?

Enter my sister’s thirtieth birthday, which from this point forward we will call the THIRSTY THIRTY party. While this might not have been the first Twilight-themed party I’ve ever thrown, it took things to a whole new level. As we near the Breaking Dawn (part 1) arrival to cinemas, I am also approaching the next installment of fantastical theme parties, which I plan with Alice-like enthusiasm and borderline-nauseating glee whenever the occasion presents itself. Now, it’s been a while since the last few parties, so this week I’m delving into my past parties to excavate recyclable ideas before innovating new ones. (It’s my version of going green.)  I believe I’ve boiled my Twilight party-planning-process down to some basic procedure steps.

Now, I must clarify. Even though I loved the books exponentially more than the movies and, I have to admit I have a lingering dislike of Kristin Stewart’s emotionless expressions, my parties are based on a melange of movie and book. 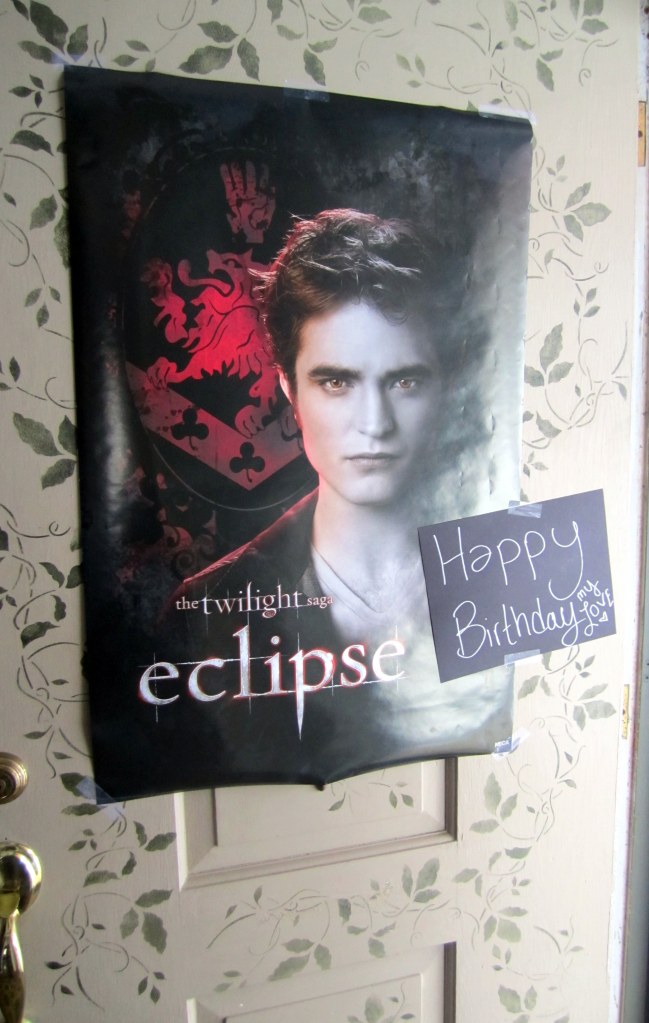 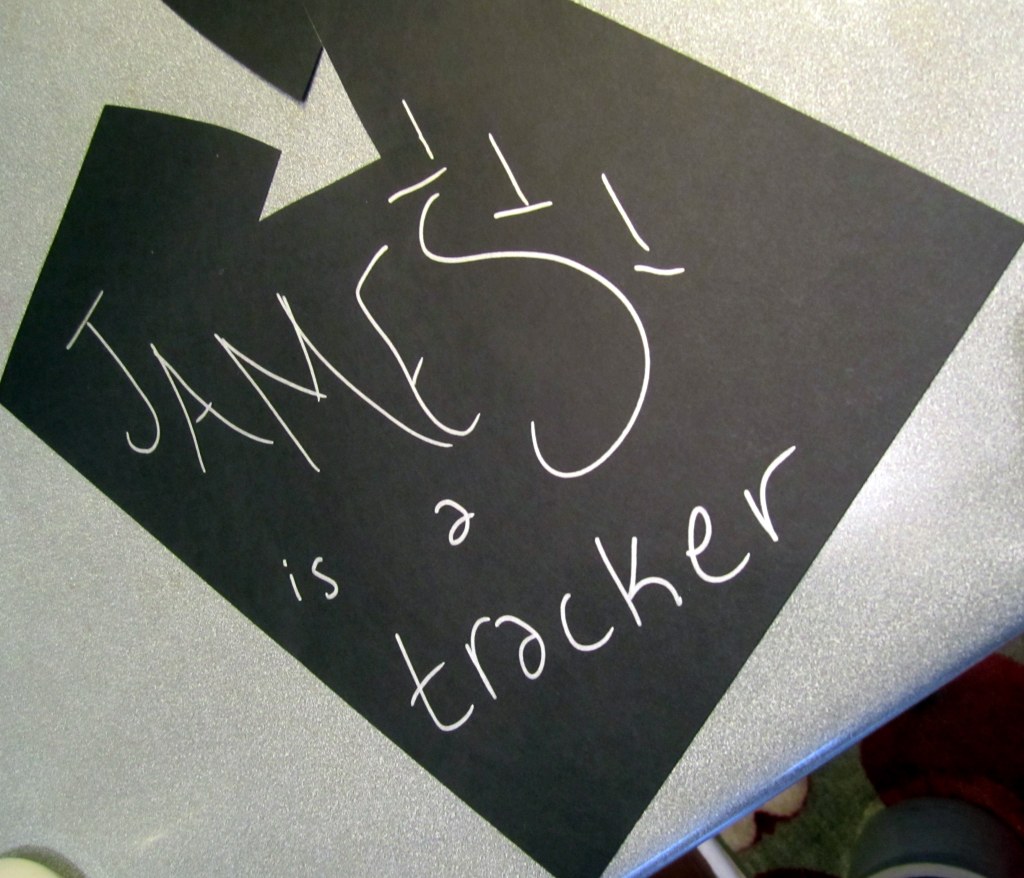 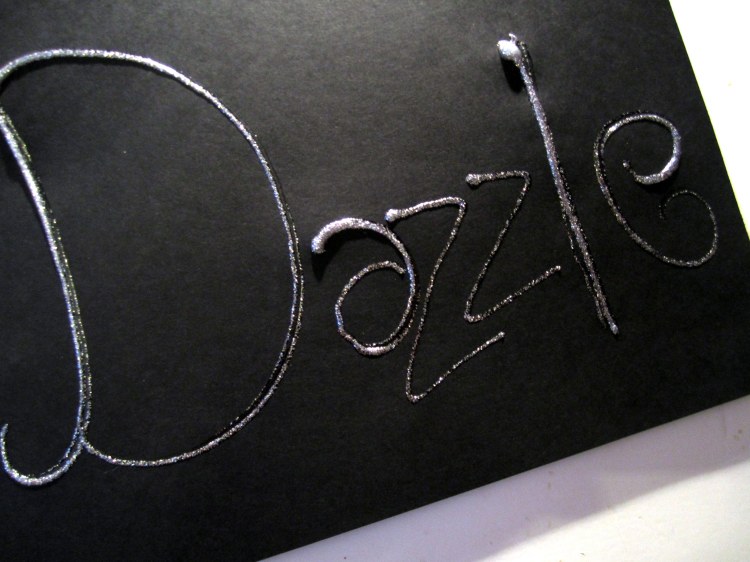 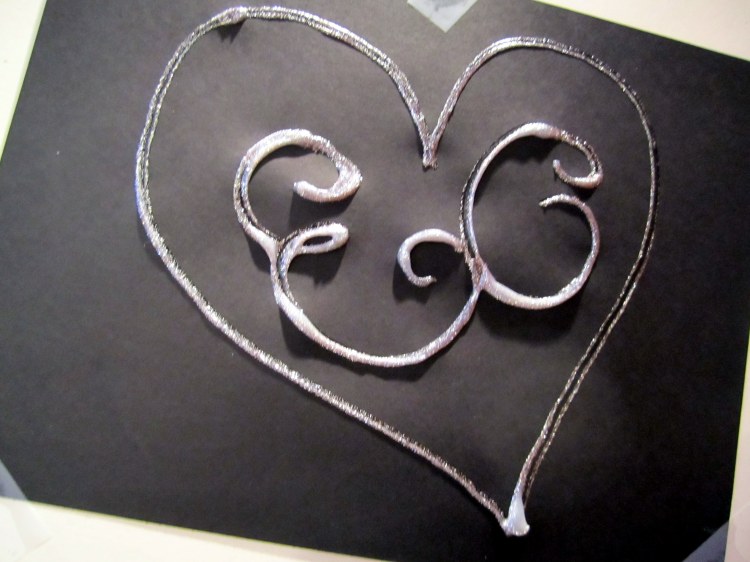 Step 2: Use what you have lying around the house.

Part of the reason why so many people love the Twilight series is because of the character development. We love that which we can (even marginally) identify with. A positive side effect of this identification-factor is that those of us who have done some book obsessing tend to see references in everyday life. THUS, party decor becomes simpler the more creative (cough, obsessed, cough) you are! Case in point:

Forks is both a town and an object. Anytime you can take something commonplace and transform it into a subtle or punny book reference, you’ve done your job correctly!

Since the Volturi have a tendency to show up at every party in the books, why not bring them strategically into our theme party. Check out this re-purposed graduation gown and a cardboard Marilyn Monroe cutout from college! 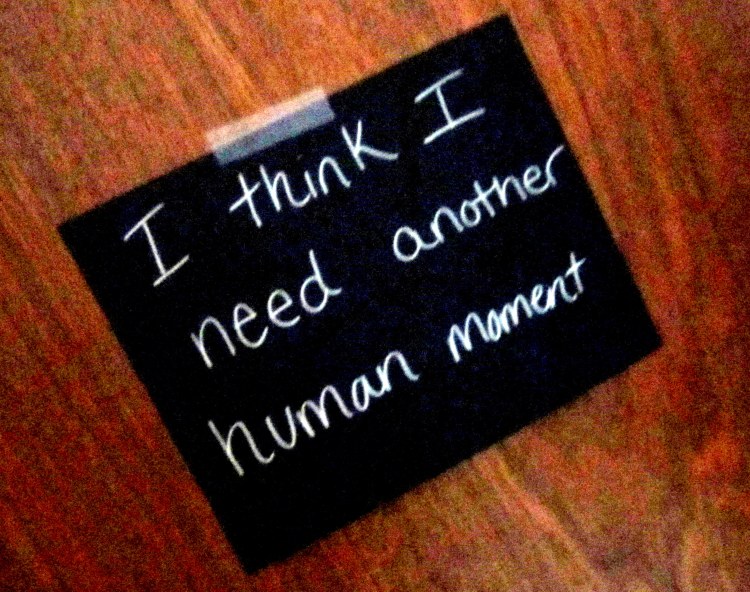 The bathroom door, with just a few words, can be surprisingly festive! 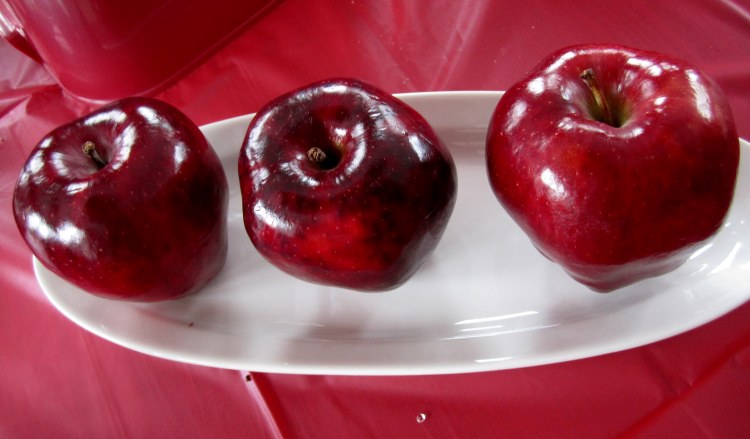 Simple book references = anything with apples. 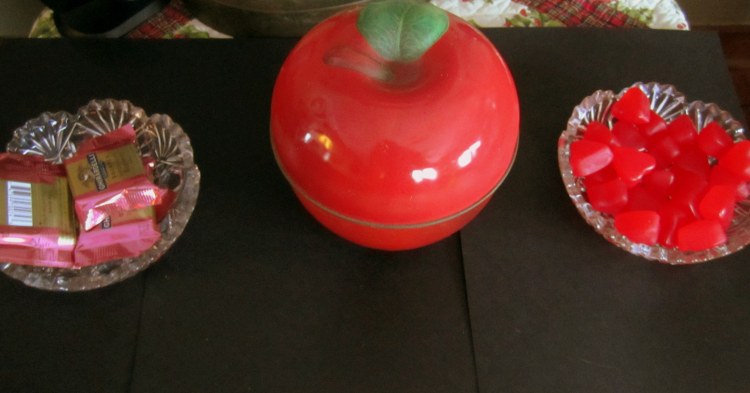 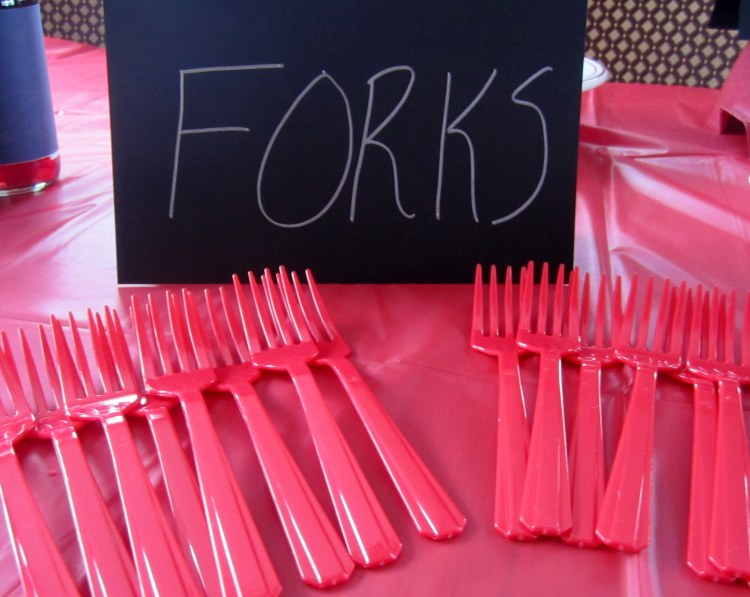 Step 3: Make as many ridiculous references to the book as possible.

Example #1 = The kitchen Island takes on a whole new dimension as ESME’s Island, popular vampire-human honeymoon destination. Rife with Feathers and an abundance of eggs, it’s put together to help you reminisce about the unique romantic getaway from book number 4!

Example #2: Re-creating that memorable moment from Eclipse when Jacob was dumb and Edward made a somewhat humorous veiled-hatred comment! 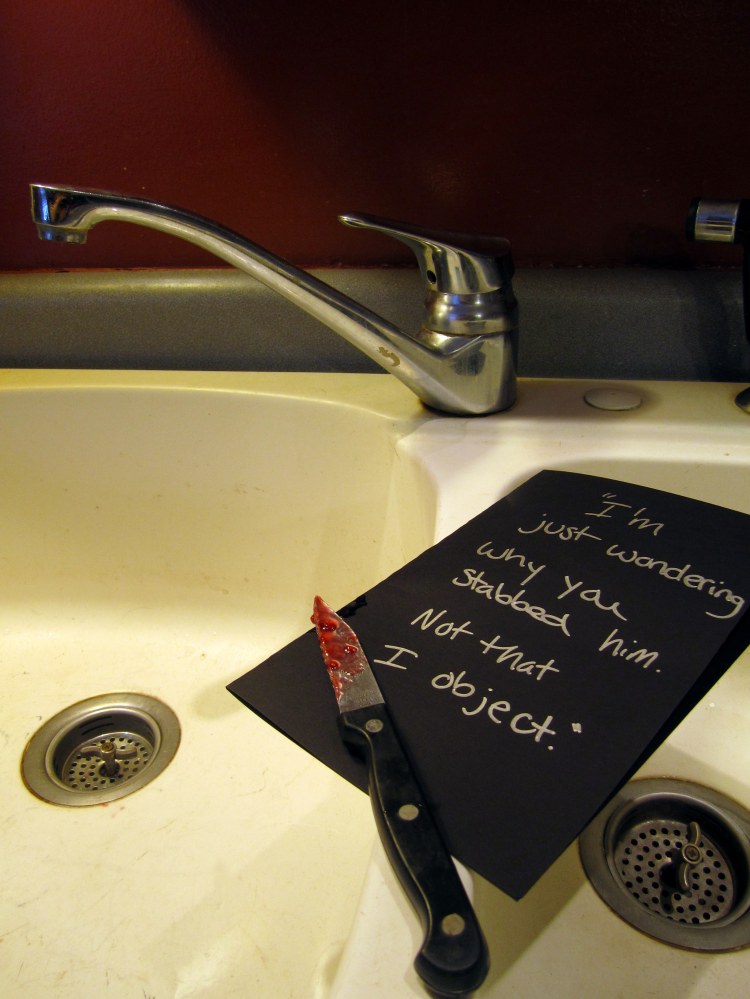 Example #3: Jasper Whitlock was in the army, a confederate soldier to be exact. So what better way to use that gigantic portrait of Abe Lincoln that hangs in the living-room? 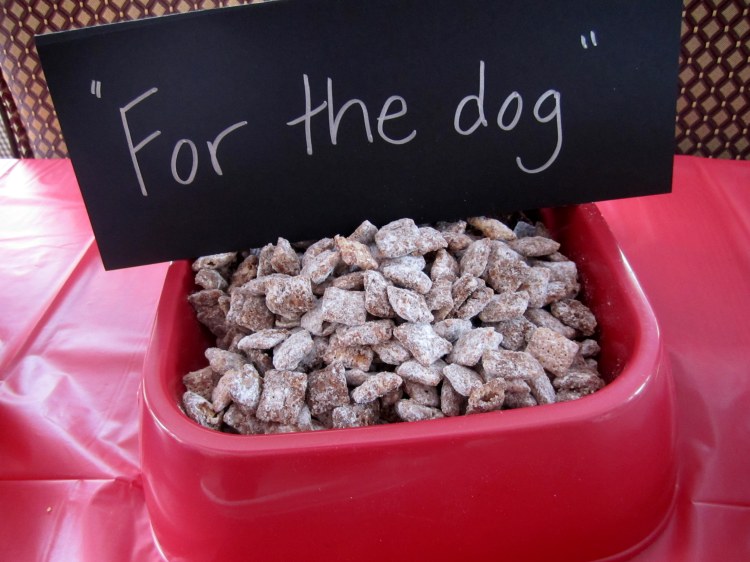 For some reason, there’s always one of these at the big parties. Might as well take a page from Rosalie’s book and be prepared! 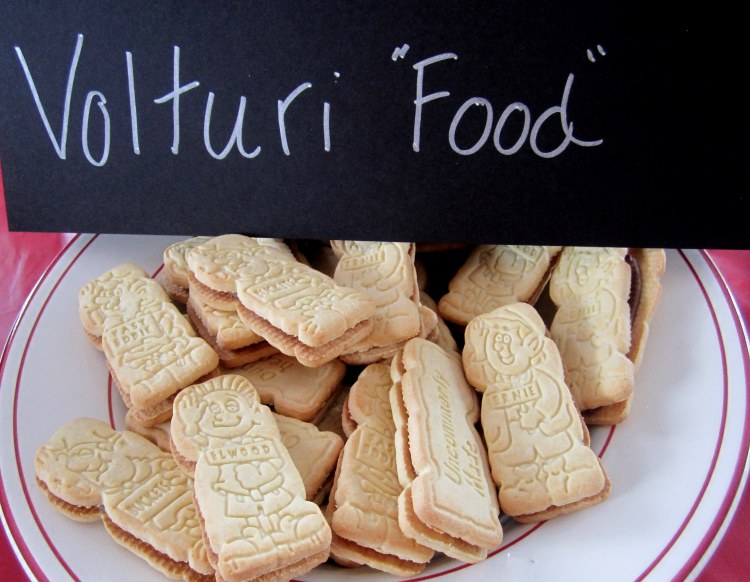 People, for those unprincipled bloodsucking monstrous vampires to eat. 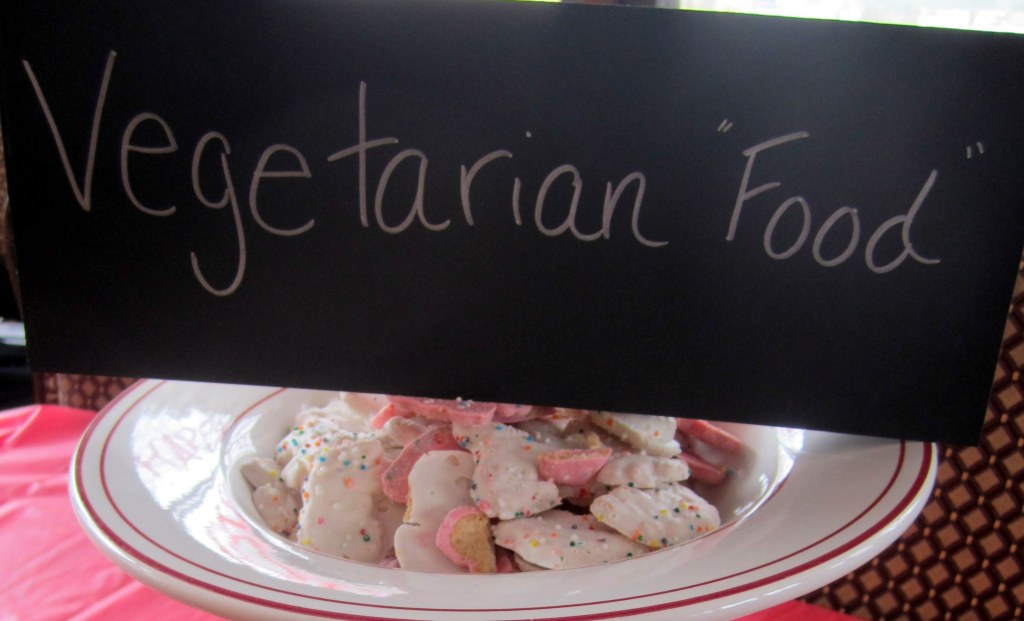 Animal Crackers, for those ethical Cullens. 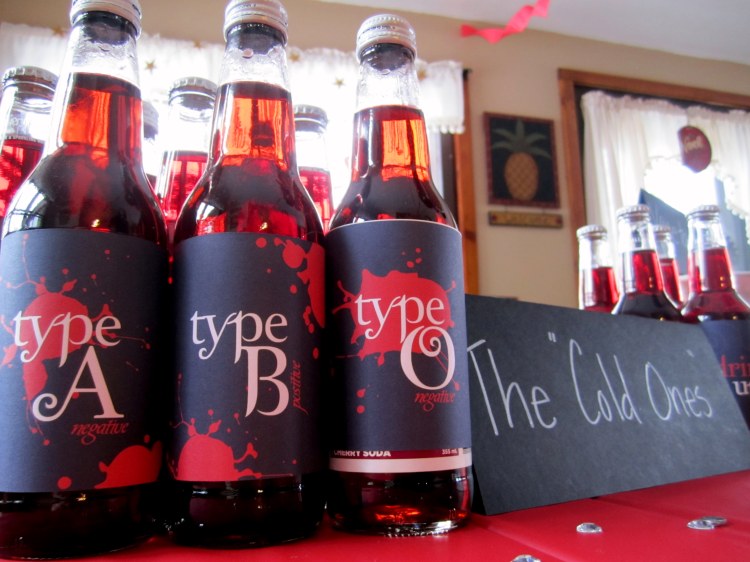 Serving up “The Cold Ones” is never a bad call.

I use as much red and black as possible, using the book illustrations as a springboard for decor!

Brie Cheese gets CHANGED, developing a new temperature and a much harder skin. . . but lives a VERY short second life, because this is DELECTABLE! (Thus, re-enacting the short second life of Brie/Bree Tanner) 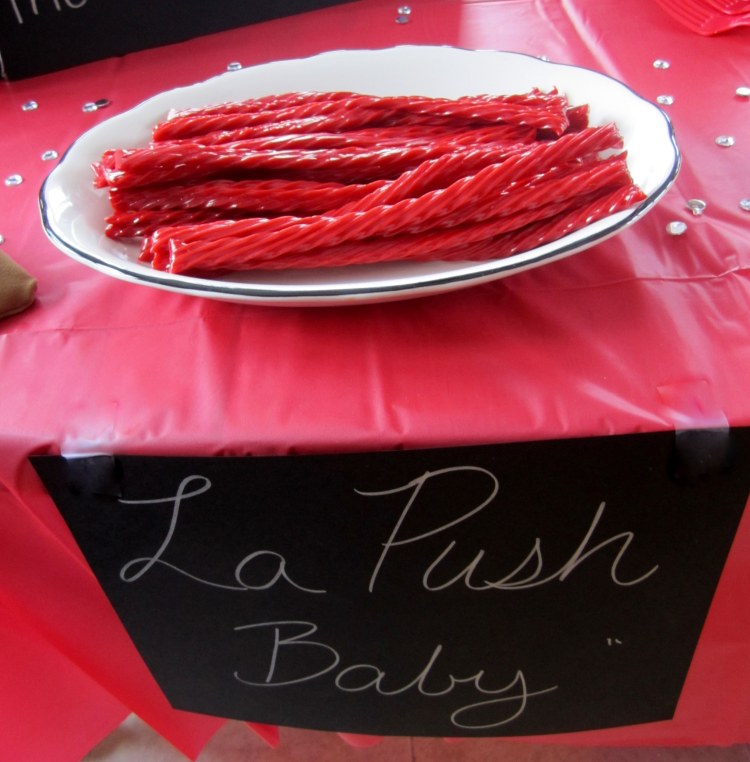 Film references enable us to eat Twizzlers. Which are always a good choice! 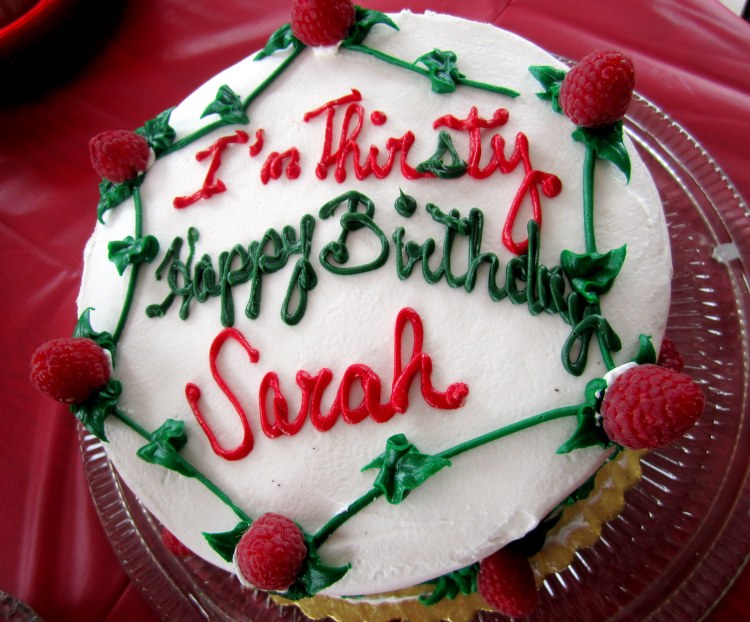 There you have it.

I am going to need to amp it up for this next party, so I’m hoping for an outpouring of ideas online. . . It’s time for some research and innovation! There will likely be a Wedding Entryway and a birthing room. With blood bags. And an obstetrics nurse. Who knows what else might happen?

I mean, vampire-human hybrids are the limit, right?