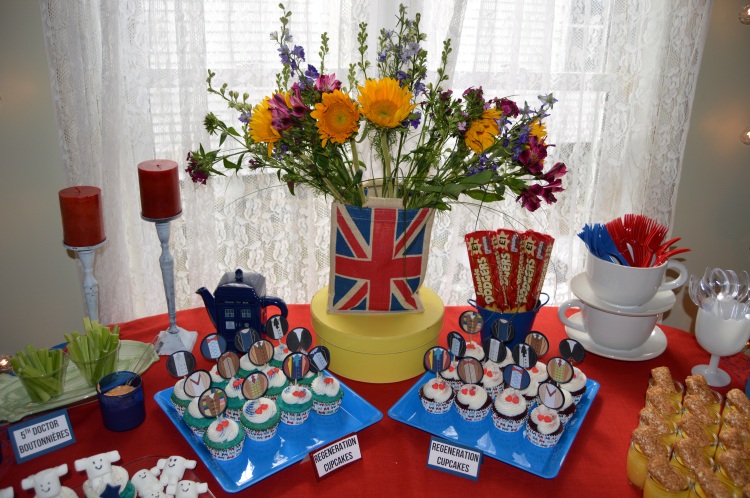 Last week, I had the chance to host a very Whovian gender-reveal party for some dear friends who are expecting their first little one this summer.

Check out a few of the details! 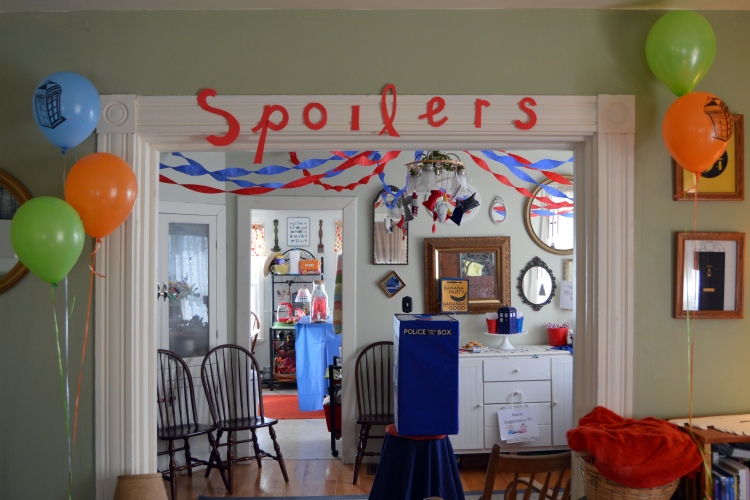 I tried to include as many relevant quotes as possible. . . 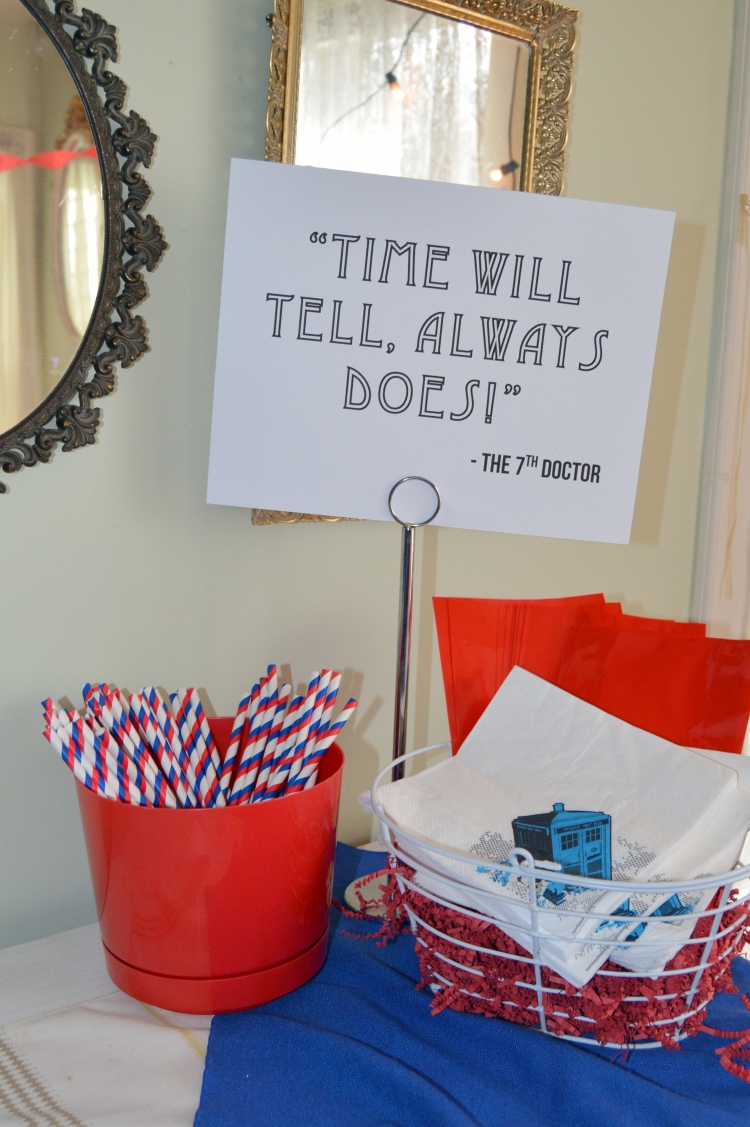 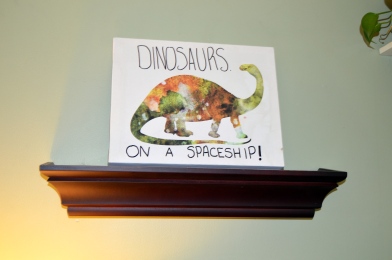 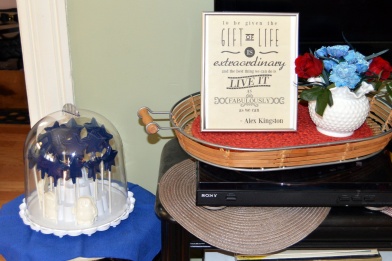 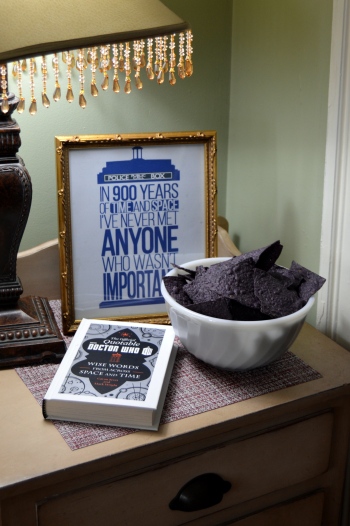 Classic Whovian foods made their appearance, with toasted-coconut encrusted marshmallows taking the place of fish fingers in this classic: 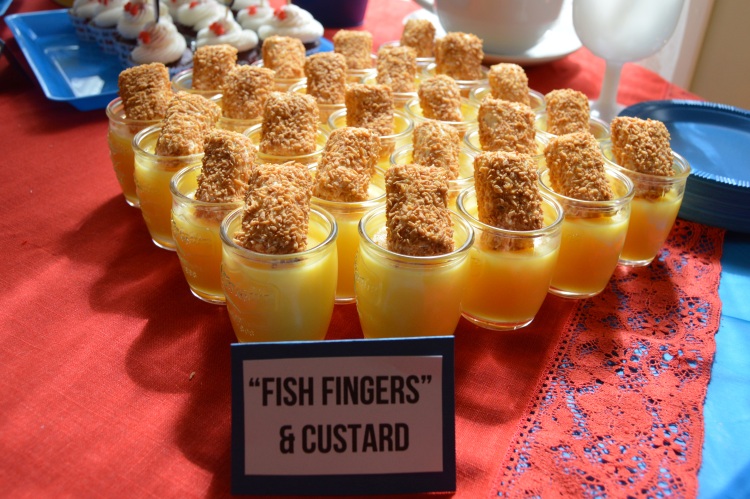 I found some incredible fanart online that combined Doctor Who with classic children’s literature like Doctor Suess. These printouts made the perfect accents for a baby-centric party! 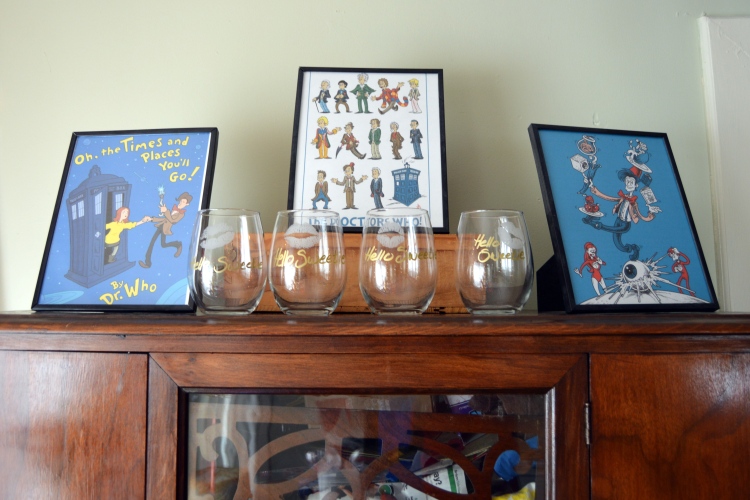 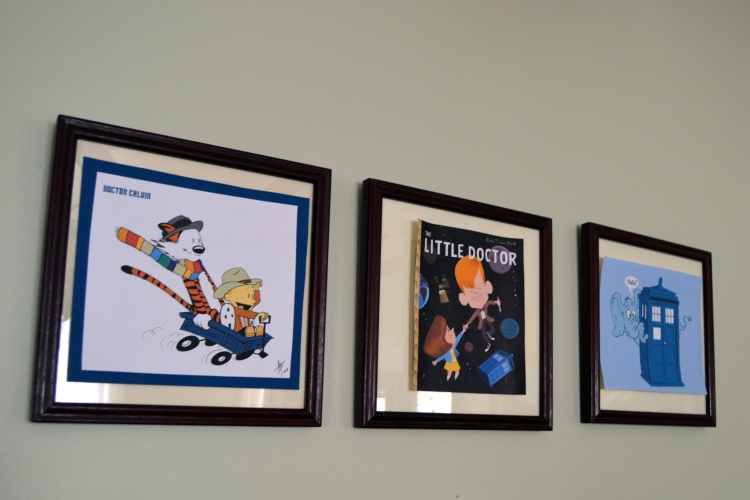 With all the sweets that were forthcoming in our snacky-menu, I was thankful for the 5th Doctor’s appreciation of celery to cut the sweetness a bit. 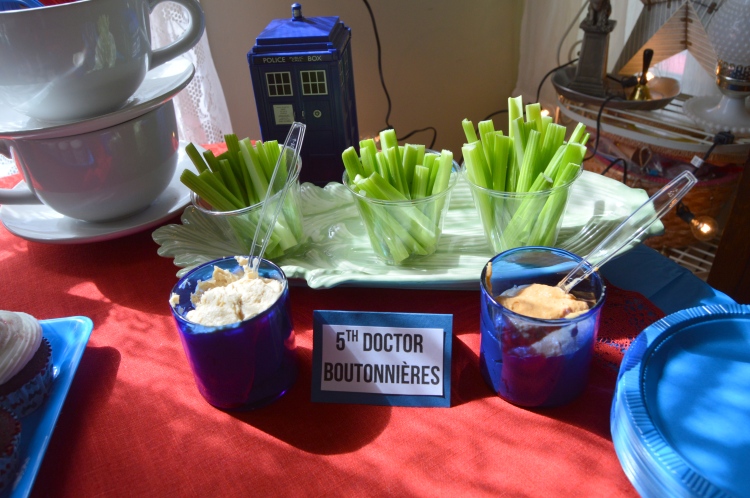 With the adorable doctor who printouts I found on the lovely blog A Typical English Home, and some really adorable heart-shaped sugar sweets, I managed to whip up some very cute Regeneration cupcakes. . . 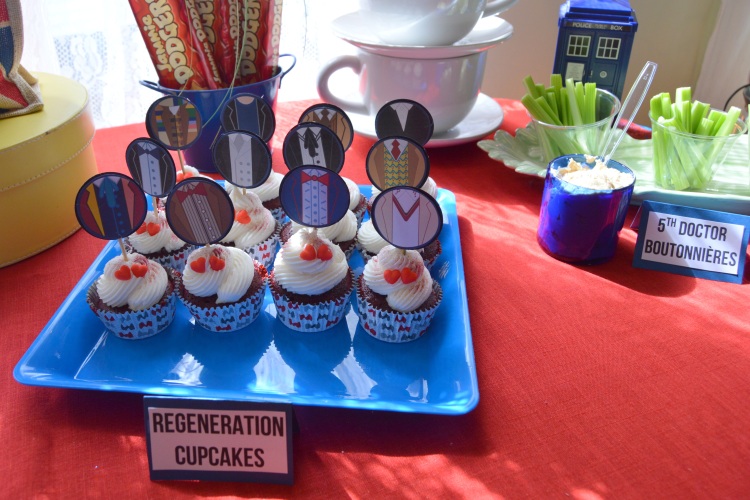 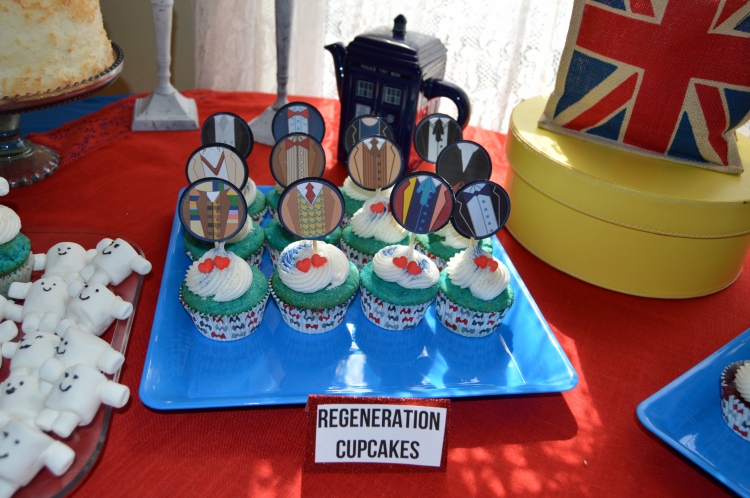 These little marshmallow-adipose were perfection, and just as fluffy and delightful as the Weeping Angel Food Cake you can see behind them! 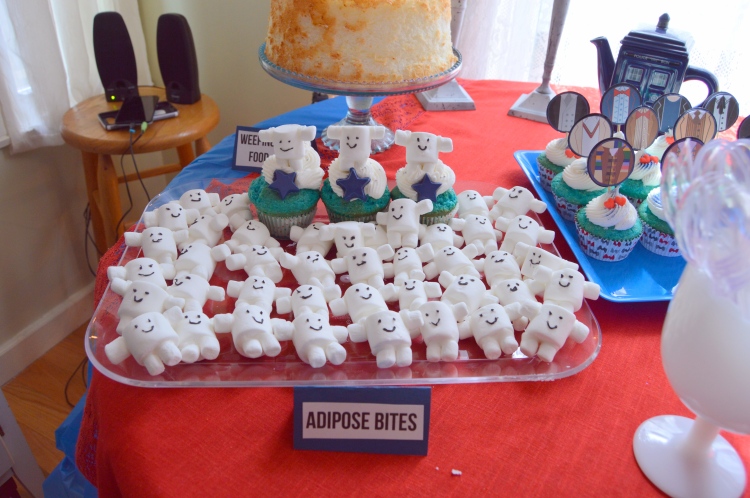 I made my own mini-TARDIS out of a box to hold the mystery balloons that would announce the gender of the impending arrival. 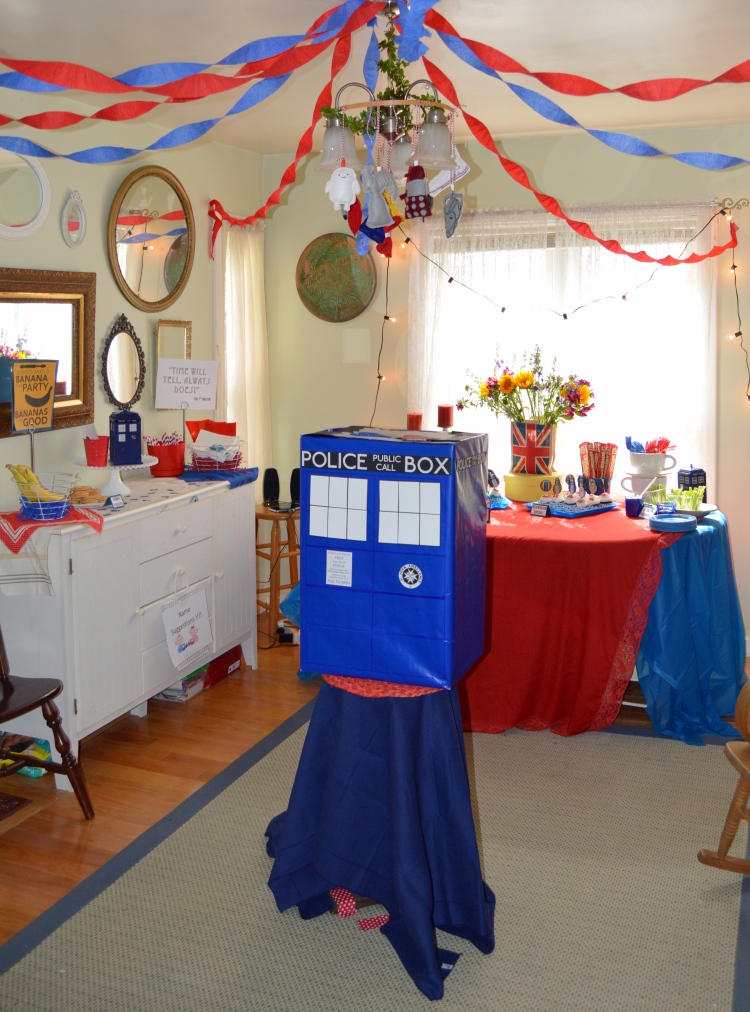 The two hearts that kept it closed were a nod to the Doctor’s makeup, with a little River Song reminder on top. 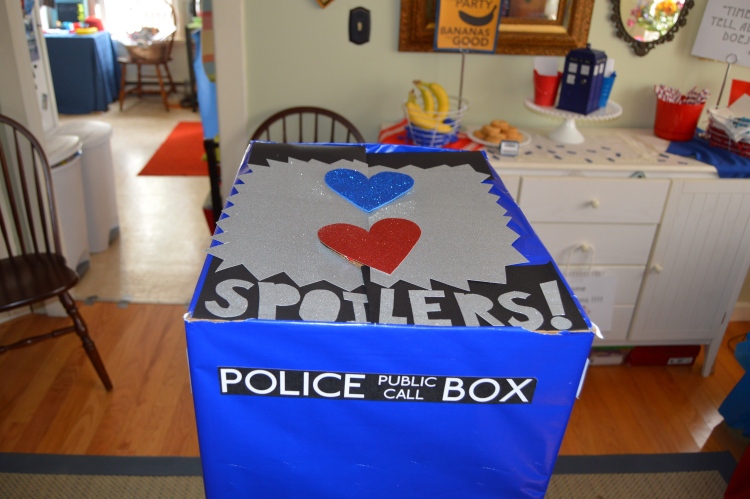 The Doctor Who mobile that I made for the baby made an excellent makeshift chandelier. 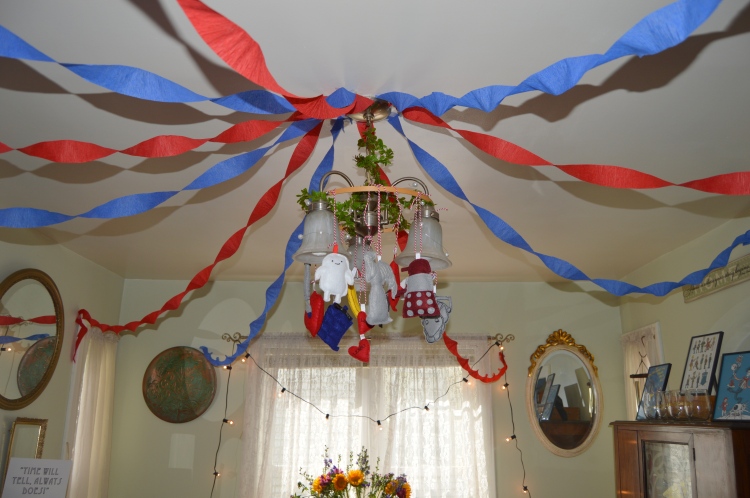 Red and blue flowers were a nice accent to the overall red and blue decor – and the chocolate stars made a lovely favor! 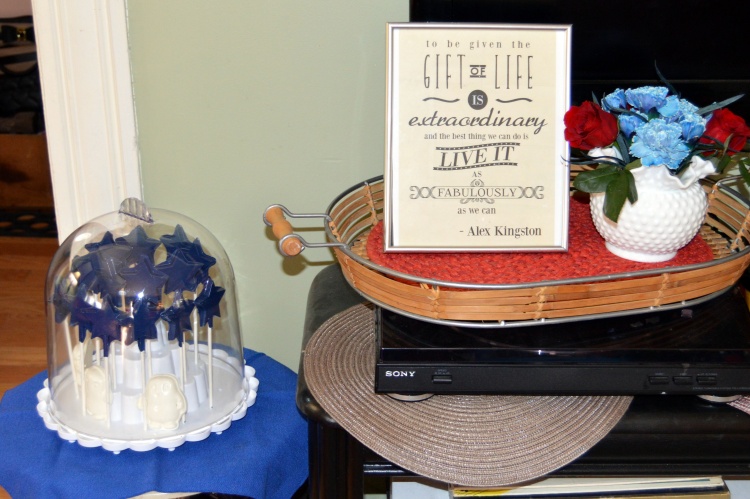 In planning this party, I discovered that I particularly enjoy Jelly Babies myself. How apropos that they should sit next to the Adipose. 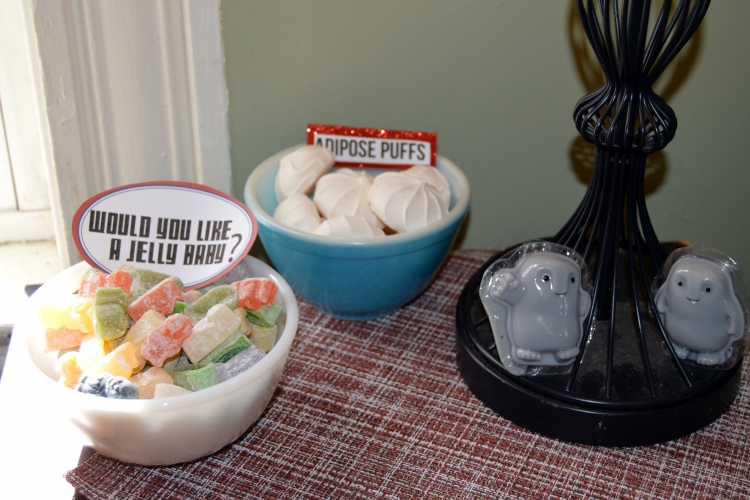 The white-cheddar cheese puff Lost Moons of Poosh were a hit, and made great table fodder for people who were writing their well-wishes and best parenting advice for the new family in the TARDIS book. I also thought the Mr. Potato Head Dalek was pretty great. 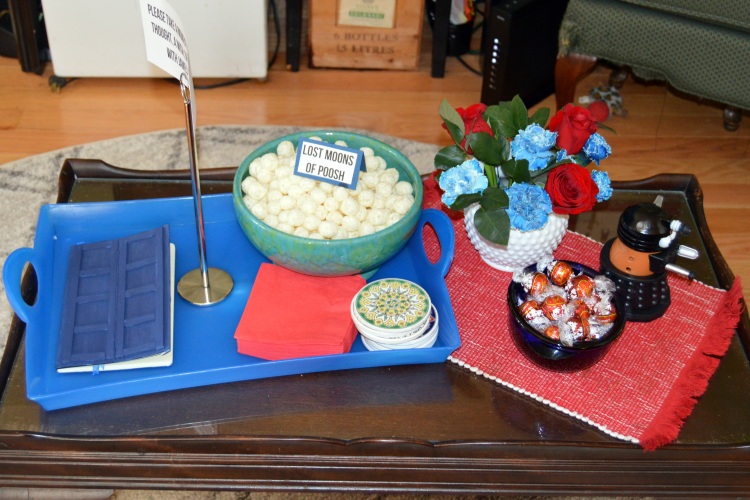 We did not forget the classic party essential: Bananas. Not to mention the Jammie Dodgers that we had in abundance next to the name-suggestion station! 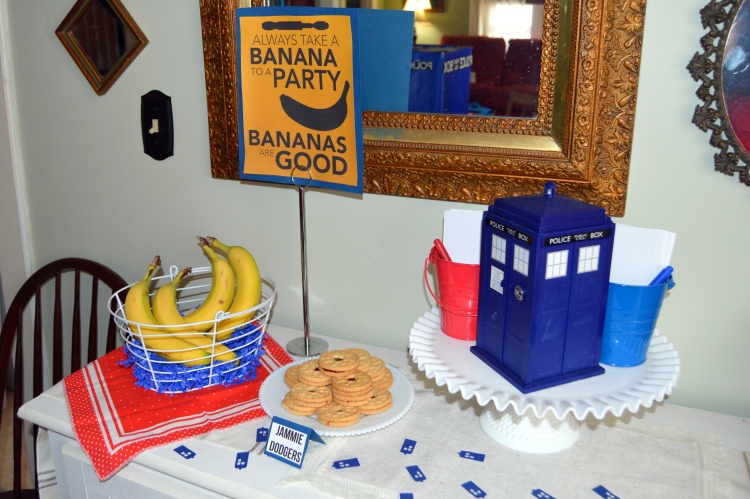 Before the happily expectant couple “gazed into the void”, we made sure that all the invitees were properly supplied with 3D glasses, à la David Tenant. 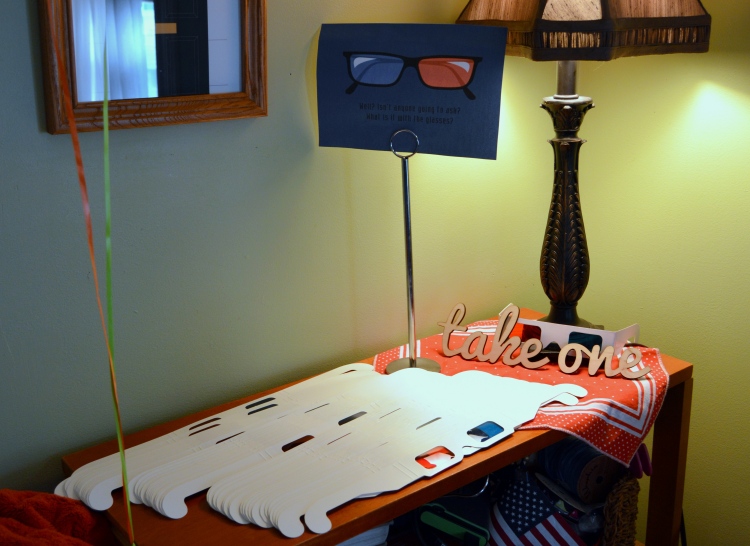 Matt Smith (my first Doctor) was not overlooked, and his affinity for bow-ties proved highly useful when it came to other savory snacks! 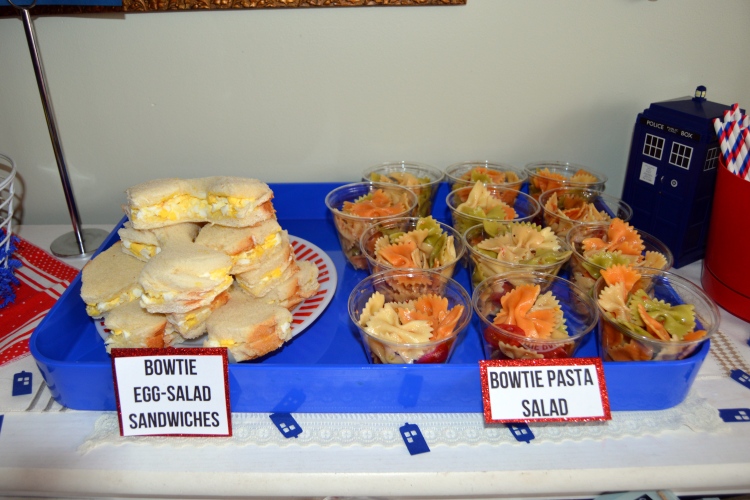 We had a few Calzone “Planets”, too, just to top things off. 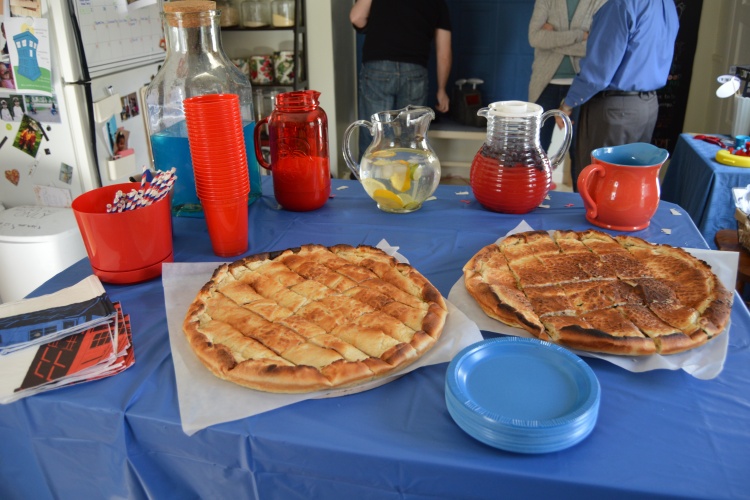 There was more. In particular, the photo booth was pretty fun, but I’ve filled this post with enough pictures for one day. To finish this all off, I would be completely remiss if I didn’t share the best part of the entire party: 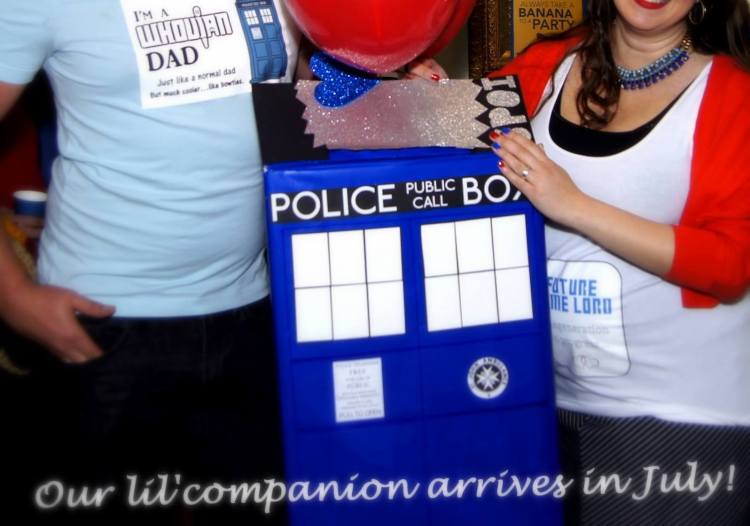 “Remember the best. My friends have always been the best of me.”