Actually, I love the gratification of crossing something OFF a list. In fact, I have been guilty of making a list of “Things to do today” halfway through the day just so I can write down the things I’ve already done and cross them off immediately. Don’t judge;  you’ve probably done it too.

Sometimes, though, life just hands you experiences that are things you never anticipated . . . and if we’re 100% honest, you might never have chosen to experience willingly. Humorously enough, AFTER they’re over, they usually become the best stories/memories and you find yourself saying ” Well, I can now cross fill-in-the-blank-crazy-experience off my bucket-list. . . after I add it!”. I believe they call this serendipity in some circles. I just call it hysterical. So, in honor of item number one, which happened exactly one year ago, here we go. . .

My Top Five Experiences Added to (but immediately crossed out on) my Bucket List:

(There has to be a better name, any ideas?)

We never knew what hit us. One moment we were listening to Jim Dale read us The Deathly Hallows and then, the next, WHAM, we couldn’t see a blessed thing. We went from being swept away by the unbelievable storytelling skill, to being almost literally swept away by a crazy snowstorm. Driving from Boston to our hometown in New York was only supposed to take 6 hours. . . but on that fateful day, the six hour stretch . . . stretched. We left bright and early, ready to be home at noon.  It wasn’t until 15 hours had passed, five of which we spent giggling and crying in a Jehovah’s witness church parking lot (while cars careened off the road dangerously nearby), that Kat and I rolled defeatedly into my driveway. I will never forget sitting in the breath-fogged car laughing in near hysteria while Kat (tears of worry still tucked in the corner of each eye) wrote cries for help to Edward Cullen on the windshield.

Stranded in the snowy wasteland sans access to any much-wished-for restrooms, we probably could’ve worked at identifying with the Israelites a little more. As we ran out of snacks and gas started to run low(er), we got our own bread from heaven in the form of a miraculous Wonder-bread Truck. Driven by our need to potty, with equal parts faith and desperation, we took our lives in hand and haltingly followed the polka-dotted truck out of that desolate and drifty lot in Paris, New York. It was as we drove away slowly that we laughingly realized that, despite our snowed out Saturday plans, we would always have Paris. Somehow that made it all better.

I have this major minor obsession with going shopping at Marshalls. One day, in dire need of slacks to wear to work, I talked my reluctant roommate into a trip to Marshalls, luring her with the chance to see puppies (this was a few months before her dog Winifred entered our lives/apartment) at the nearby pet store. I obligingly trudged into the pet store with her and, spotting a kitten in a much-pierced store attendant’s arms near the back, I moseyed over to check out the bundle of joy, leaving my starry-eyed puppy-lovin roomy to her own devices. As I neared the tortoiseshell little bundle of kitten, her eyes lifted to mine. I could feel the earth tilt on its axis and I finally understood what people say about love at first sight. Maybe it was just the person that pushed by me to get to the puggles, but I still knew Winky was the cat for me. She’s awkward. Have you ever read Kathy Hoopman’s book All Cats Have Asperger Syndrome? Well, mine does too. In spades. I love her. Feel free to judge me. I walked into the Mall looking for pants and I walked out with Winky. . . and a couple of dresses. 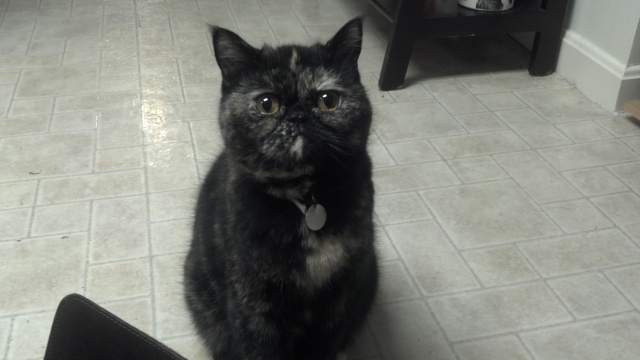 Over a year later, and I still don’t regret it. I’m embarrassingly in love with my awkward cat.

I am not going to go into oodles of detail on this one. Suffice it to say: Last time I was in Paris, I struck up a good conversation with Julien, who then decided to get a little . . . romantic. With a few extreme nudges from my travel companion and a little temporary insanity, I went with him into an random apartment building, where I immediately began having second thoughts. With growing trepidation, we squeezed into the worlds smallest elevator and went up . . . and up and up and up . . . to the seventh floor of Building X. We walked down a poorly lit hall and Julien whispered into my ears that this view of Paris was just for us . . . pure romance. Also like a scene from a criminal minds intro. . . you know, the one where the girl ends up being slaughtered and Julien is really a serial killer? Suffice it to say, after leaving Building X and evading Juliens amorous embraces, I decided that I would heed my own advice from that moment forward when it comes to the romantic advances of foreign men.

But at the same time. Put it on the bucket list, then check it off friends. Right???

#4: Living out Disney at Singing Beach

This is pathetically self-explanatory. All I have to add is (a) that it was an incredibly well-timed wave, (b) that my roommate saw coming and did NOT see fit to warn me about . . . and (c) that lots of people saw and were laughing. It doesn’t matter. My Live-a-Real-life-Ariel-Moment was added and subtracted to (and from) my bucket list that day.

“Unintentionally being a key element in someone else’s scavenger hunt”

Believe it or not, I don’t actually try to have these things happen to me. . . they just do. Now, in this case, I was dressed as a princess for a good reason! Well, a reasonable reason. I was going to a “Princess Party” . . . for a guy I know named Andrew. But a princess party, nonetheless. It should also be noted that I was NOT the most outlandishly dressed princess at said party and notable among the attendees was a girl dressed as a full-fledged UNICORN. But I digress. Wearing this garb, I took a few friends on a quick snack-run to the nearby grocery store and waited outside while they ran in (flouncy petticoats get warm and I was wearing a pink plastic coat that made me entirely too overheated!). No sooner had my friends gone in than I man in a limousine pulled up and 12 women with pink baseball caps jetted out of the doors spewing words like BACHELORETTE PARTY, SCAVENGER HUNT and CAN’T BELIEVE WE FOUND YOU, WE NEED A PRINCESS!!! Suffice it to say, somewhere out there, probably coloring a few facebook albums, there are pictures of me in full princess getup. Boo. Yeah. 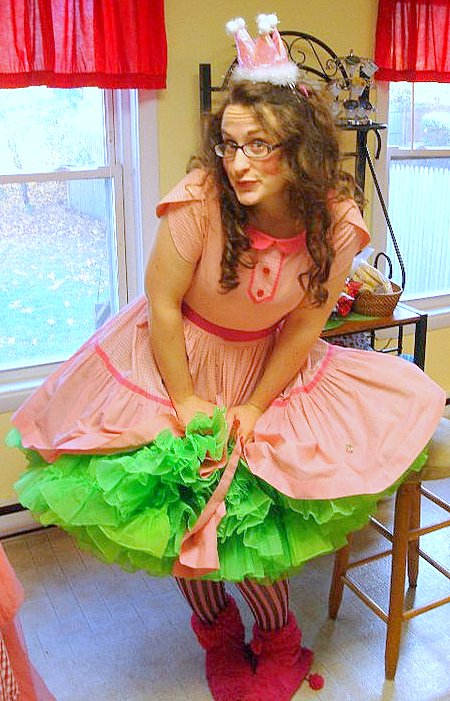