As a high school French teacher,

I am occasionally devoted to my work to a fault. Halloween is usually a prime example of said ridiculous over-devotion . . . Every year, we teachers attempt to dress in ridiculous costumes for the general amusement, entertainment and edification of our students. I see it as a personal challenge to make my costume relate to French in some way.

Example: Once, I dressed up as Marie Antoinette…

That year I brought cake for all my classes and let them eat it.

This year I had a plan, or at least an inspiration. But, thanks to Sandy, I was thwarted in my super-secret costume plans by delayed shipping, and thus found myself doing a last-minute scramble to gear up for Halloween. In attempting to root out the absolute best last-minute costume for this year in the absolute last few minutes, I entertained a multitude of ideas. In the end, however, I wound up returning to the world of internet memes where my classes had recently forayed. It was 8pm when I decided to do the unthinkable; be the ERMAHGERD girl. . . en français.

For those of you who might be unfamiliar (and don’t want to follow the link to the world of internet memes to find an explanation) I will share with you explanation . . . A “meme” is a term with a lot of nuanced definition you can look up that today often refers to a picture that becomes hugely popular on the internet (i.e. goes viral). These images are often given a variety of subtitles and often doctored (for better or worse). Now, meme pictures often convey a specific look/feel that add to the words in some way. Enter the EHRMAHGERD girl. Her extremely-awkward photo became the basis for a series of memes that highlights the mispronunciation of “Oh My God”, usually accompanying some fairly ridicule-worthy-yet-appreciate-able images. Typically, this strain of meme is used to illustrate overly-enthusiastic or extreme reactionary expressions to something average (as far as I can tell). A few weeks/months ago, my students and I decided to translate the pheMEMEnon, and wound up with ERMERNDIEUR . . . 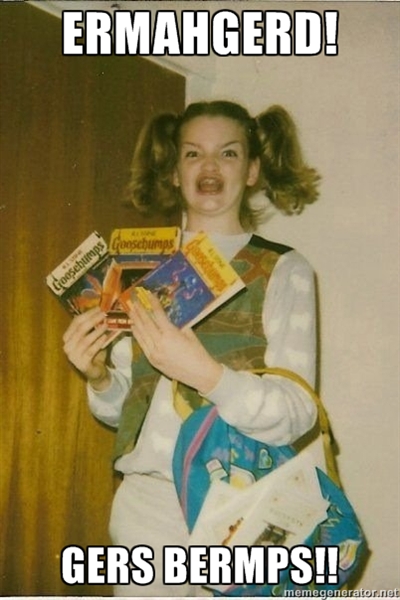 Anyhow, now that we’ve got all explanations covered, you should know that my late-night choice left me just enough time to run out to Savers  for an awkward pair of pants and a vest before they closed at nine. After a half hour of searching, a somewhat-dubious-moi paid the cashier for some of the ugliest clothing I had ever seen. Actually, the Savers Cashier ended up being highly encouraging  (“You’re going to be the ERMAHGERD GIRL?! That’s awesome! I wish you were my teacher!”), so bolstered by her enthusiasm, I went home and used glue-sticks, cardboard, and anything else I could find to perfect the outfit. 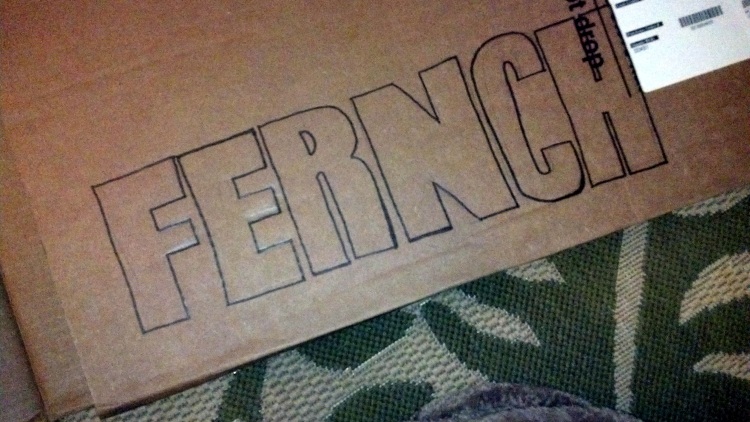 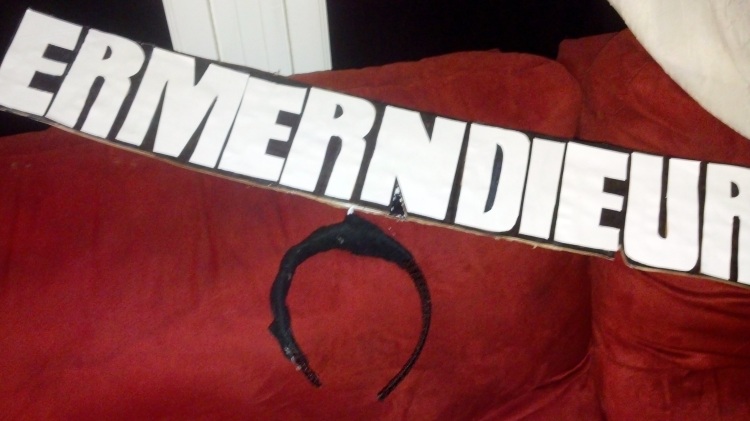 Several hot-glue-burns later (aka, MUCH later), I was

This morning, I arrived at work as one seriously tired meme (double entendre INTENDED).

(And, yes, I do have French Goose Bumps Books, Aherm, I mean “Chair de Poule”.)

So, when we compare, not too shabby for the last minute, ay?

Well, at least not unintentionally too shabby. I hope you all had as much fun costuming, and I think I’ve earned the right to wish you all a